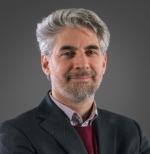 Marco Mellia graduated with PhD in Electronic and Telecommunication Engineering in 2001. He is a full professor at Politecnico di Torino, Italy, where he coordinates the SmartData@PoliTO centre on Big Data, Machine Learning and Data Science.

Prof. Mellia has co-authored over 250 papers published in international journals and presented in leading conferences, all of them in the area of communication networks. He holds 13 patents.

He won the IRTF ANR Prize at IETF-88, and best paper awards at IEEE P2P'12, ACM CoNEXT'13, IEEE ICDCS'15. He participated in the program committees of several conferences, including

Area Editor of ACM CCR, IEEE Transactions on Network and Service Management and Elsevier Computer Networks. He is a Fellow of IEEE.

His research interests are in the area of Internet monitoring, users' characterization, cybersecurity, and big data analytics applied to different areas.